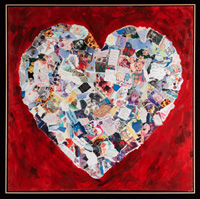 After I was diagnosed in September 1996, I received many cards from family and friends, and also from people I didn't know who had heard about me. The outpouring of support was incredible. I kept the cards on my mantle until it felt morbid to have them there. Then I remembered hearing a story about a family who lost their home in a fire. All that remained was a box of melted glass and silverware. They turned the contents of the box into a mosaic table for their new home. So I took the cards and turned them into an enormous collage of support. I worked on it through chemotherapy, surgery, and radiation, completing it toward the end of treatment in March 1997. I hope as my 4-year-old son gets older, this is what he remembers of this terrifying time: Mom's art work.

In 1997 the Susan G. Komen Foundation, The Breast Cancer Fund and the American Cancer Society announced a call for entries: art and writing by women who had faced breast cancer. They received 600 submissions from around the world. The response from women seeking to express their experience both private and public was to become the phenomenon, Art.Rage.Us. Seventy-five artists and writers were selected to become a part of the traveling Art.Rage.Us exhibit, and an extraordinary 175-page catalogue, Art.Rage.Us, Art and Writing by Women with Breast Cancer. Ms. Bellen had 3 pieces of work accepted into Art.Rage.Us: "Support" mixed media, "My Tattoo" photograph, and "My Third Minute" video documentary.

In 2004, The Breast Cancer Fund dismantled the Art.Rage.Us exhibit, but its power lives on as a book and on line exhibit. Marin General’s Radiation Oncologist, Francine Halberg, M.D. said this of "Support": "It touches on something universal, even if you’ve never had breast cancer; everyone has had something in their life touch them deeply."

In addition to the cities to which Art.Rage.Us has traveled, "Support" was a part of the Department of Defense's Survivors Celebration exhibition in San Diego, CA. It was published in a book by the Oncology Nurses Society of Congress, and was printed on banners by Macy's of Sherman Oaks to promote Art.Rage.Us in Los Angeles. Genentech and Ortho-Biotech have also used "Support" for patient information publications.